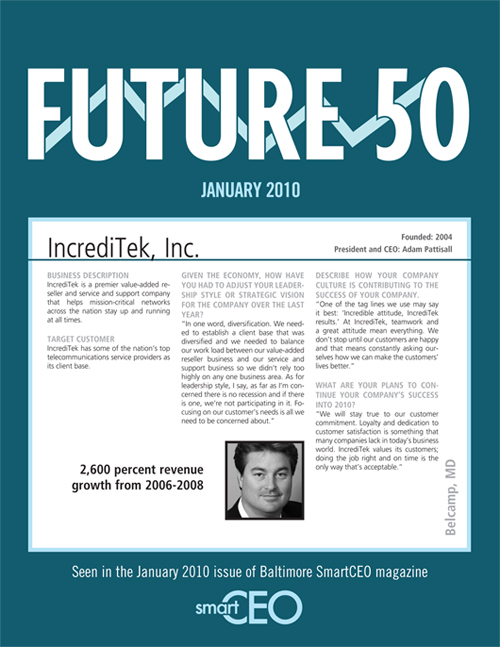 Belcamp, MD – January 11, 2010 – IncrediTek, Inc., was named one of the top 50 fastest growing companies in the greater Baltimore, Maryland region by SmartCEO Magazine. IncrediTek was selected as a “Future 50” winner for the company’s economic resilience, revenue growth and goals towards excellence. The SmartCEO Future 50 salutes 50 growing companies in the greater Baltimore, Maryland region based on revenue and employee growth over the past three years (2006-2008). IncrediTek’s revenues grew 2600% and its number of employees more than tripled between 2006 and 2008. IncrediTek is a premier Value Added Reseller and Support Services company that helps mission critical networks across the nation stay up and running at all times. IncrediTek’s customer base is made up of some of the nation’s largest telecommunications providers. One of the reasons for IncrediTek’s success and a common thread heard from this year’s winners was constant focus on customers. IncrediTek’s President and CEO, Adam Pattisall, was quoted by SmartCEO as saying it best. “As far as I’m concerned, there is no recession and if there is one, we’re not participating in it,” Pattisall said. “Focusing on our customers’ needs is all we need to be concerned about.” “It is an honor and privilege for IncrediTek to win the Future 50 award. Every person on our team works with one thing in mind, customer satisfaction, so this award really helps highlight their dedication and success,” concluded Pattisall. Adam Pattisall and the other SmartCEO Future 50 winners were honored at an awards event on January 7, 2010 at the Baltimore-Marriott Waterfront Hotel. Over 600 C-level executives were in attendance. Kevin Plank, CEO of Under Armour, was the keynote speaker at this year’s event. He took this opportunity to highlight the lessons he’s learned in growing his own successful business.